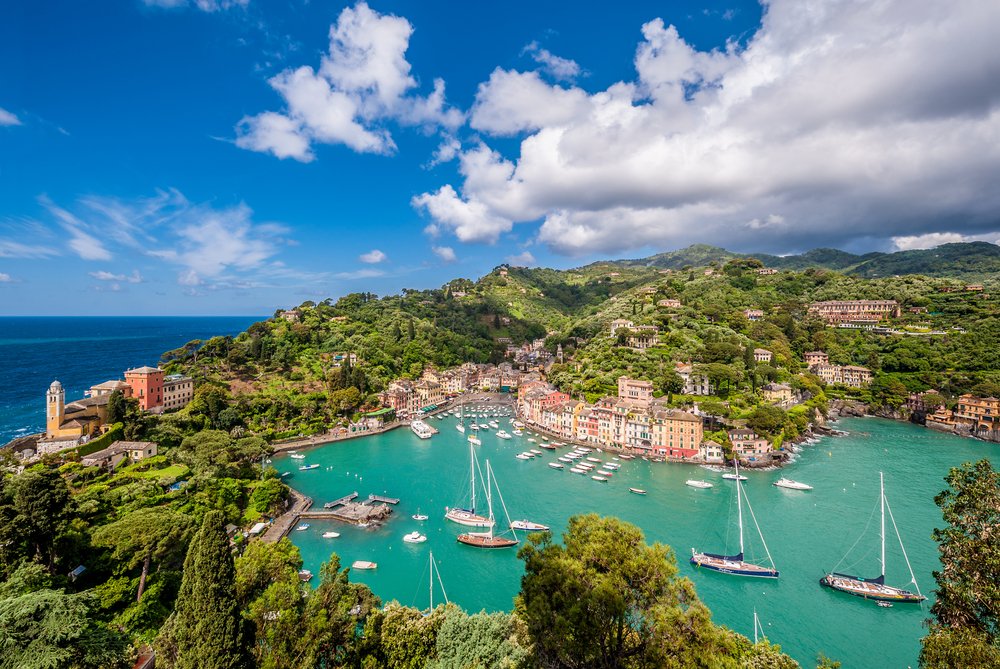 Portofino (Portofin / pɔrtufiŋ / in Ligurian dialect) is an Italian municipality of 420 inhabitants of the metropolitan city of Genoa in Liguria. Due to its administrative extension, it is the smallest municipal territory of the metropolitan area. The municipality is located in the western part of the Gulf of Tigullio, in a bay at the foot of the homonymous promontory, east of Genoa, marking the geographical border between the Golfo Paradiso and the Tigullio. 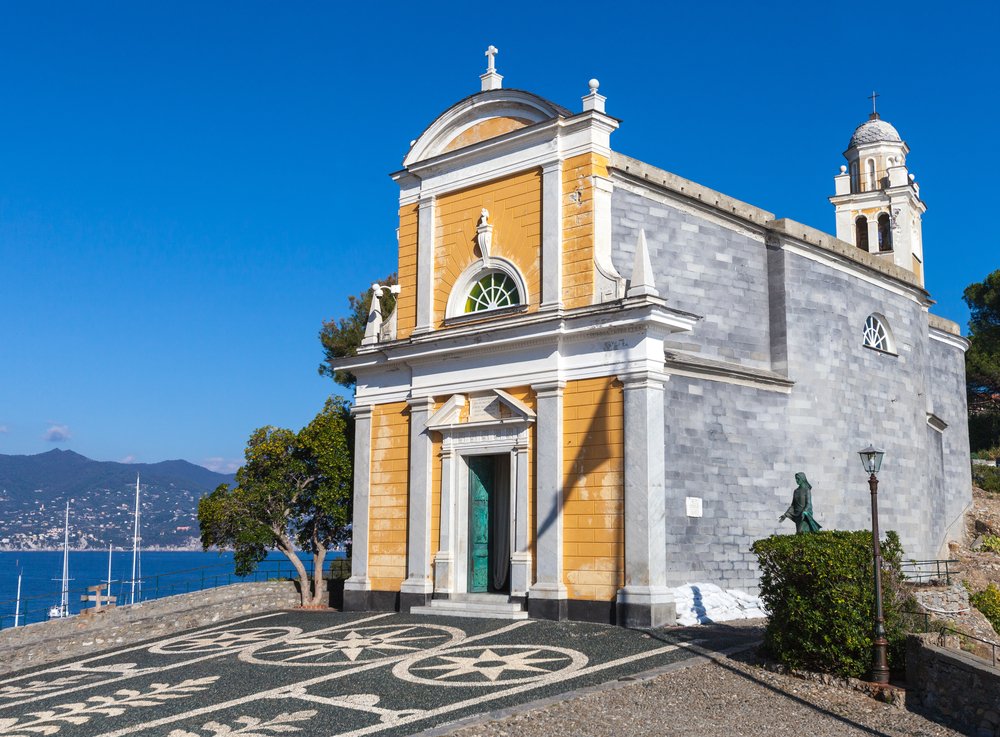 According to Pliny the Elder, the village of Portofino had during the Roman Empire the name of Portus Delphini, between Genoa and the Gulf of Tigullio due, perhaps, to the large population of these animals (dolphins) in the Gulf of Tigullio.Fin dall the Lombard period in the territory were the monks of the abbey of San Colombano di Bobbio; in Liguria they were located not only in Genoa but also in the east, in the area they had expanded from Pieve Ligure to Moneglia, with various abbeys, monasteries and cells, among which that of Comorga near Carasco and San Fruttuoso di Capodimonte.

In 1797 with the French domination of Napoleon Bonaparte the established municipality of Portofino returned from the December 2 in the Department of the Gulf of Tigullio, with capital Rapallo, within the Ligurian Republic.From 28 April 1798 with the new French regulations, Portofino returned to the III canton, capital of Santa Margherita, of the jurisdiction of Tigullio and from 1803 the main center of the II canton of the Gulf of Tigullio in the Entella Jurisdiction. Annexed to the First French Empire, from 13 June 1805 to 1814 it was included in the Department of the Apennines. In 1815 it was incorporated into the Kingdom of Sardinia, according to the decisions of the Congress of Vienna in 1814, and subsequently in the Kingdom of Italy from 1861. From 1859 to 1926 the territory was included in the V mandamento of Rapallo in the district of Chiavari of the then province of Genoa.

Between the Ligurian Sea and the Apennine, a variety of flavors and recipes that, thanks to its extraordinary climate, offer intense scents and Mediterranean and mountain flavors. Famous is the Pesto to Genoese. “Boghe in scabecio” Ligurian version of the carpion prepared by frying flamed fish and then immersed in a marinade of vinegar mixed with a sauce; “mesciua” dish characteristic of the area of La Spezia, consists of chickpeas, beans and wheat cooked in boiling water and seasoned with salt, pepper and olive oil, “fagot” fettuccine seasoned with pesto or artichoke sauce; Recco, the bass of Savona, the frizzas of Val Bormida.

In Portofino the provincial road 227 ends, which allows the only vehicular connection with the nearby Santa Margherita Ligure. An ancient pedestrian path, on the heights, runs along the route in a non-drivable form and also allows the connection with various neighboring municipalities through ramifications.
The Santa Margherita Ligure-Portofino station is the nearest railway stop on the Genoa-Pisa railway line.
Alternatively, the boat can be departing almost every hour from the promenade of Rapallo with a stop in Santa Margherita Ligure. Here it makes a small stop necessary for the disembarkation and boarding of the passengers and then proceed towards the village. There are also links with Camogli, the bay and its abbey of San Fruttuoso and Genoa. 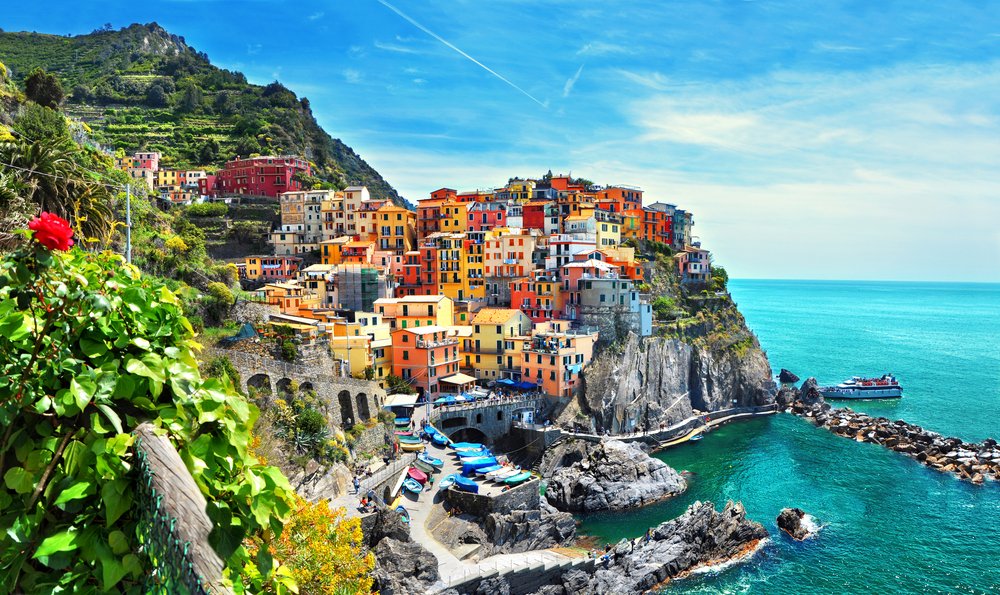 The Cinque Terre have a jagged profile along the five miles of rocky coastline between two headlands. Spurs of rock high up over the sea, tiny coves, bays and small beaches among the rocks predominate; a landscape unique in the world, with a crystal clear sea. The five seaside towns: Monterosso, Vernazza, Manarola, Corniglia and Riomaggiore surprise visitors with their traditional-style buildings which reflect the history of these lands. The Marian shrines, first and foremost, linked by trails and which can also be reached by car, the remains of castles and walled fortifications built to counter the Saracen threat and the churches in the typical Gothic-Ligurian style that distinguishes them. The Cinque Terre are a National Park and, since 1997, a World Heritage Site protected by the Unesco. They are ideal places for mountain biking, for hiking or for romantic walks along the pathway called Le Vie dell’Amore.